It seems to be in the news all the time – plastic in the oceans, in the food chain and now falling in the snow in the arctic. As this becomes a topic on everyone’s lips here are some facts that you might not know about plastic. You can share these around the office while you fill up in your water bottle or reusable glass!
1. Plastic is made from oil and the organisations linked with the plastics industry are big fossil fuel companies like Exxon Mobil and Shell.

2. Plastic was originally marketed as freeing women from household chores like washing up- because single-use plates meant they could just be thrown away. 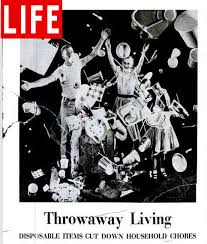 3. A polystyrene clamshell box (one you might get from a kebab van, in the early hours) has a lower carbon footprint than an aluminium takeaway box, although the issues with littering and microplastic creation from polystyrene are significant waste issue.  (Journal of cleaner production)

4. These signs were not designed to tell customers which plastics can be recycled. They were created by the plastics industry in 1988 as a way of classifying the hundreds of plastic types- it’s no wonder plastic recycling is confusing!

5. According to Peter Rem, Professor of Resources and Recycling, Delft University of Technology “Plastics polymer manufacturers have not been motivated to make the perfect plastic polymer, one that could be endlessly recycled, because that would do them out of business”

6. The current backlash against single-use packaging isn’t new. In the USA, in the 1970’s,  there were protests against throwaway containers, following the move away from reusable. However, the organisation ‘Keep America Beautiful’ turned the responsibility back to consumers with their campaign ‘People start pollution. People can stop it’.  Turns out that Keep America Beautiful was a campaign started and funded by the packaging industry. Read more about The Crying Indian Ad that fooled the environmental movement.

7. Fast forward to 2019, and the Plastics Industry created a new body called ‘The Alliance to End Plastic Waste’, whilst simultaneously an anticipated $200 billion will be invested in the US petro-chemical industry according to Wood Mackenzie Chemicals.

8. One of the bigger causes of micro-plastics in the oceans is from car tyres according to research commissioned by Friends of the Earth, yes that’s right they are made from plastic and not from rubber.

9. Compostable plastics do not decompose if they become litter or end up in the oceans- they need to be heated to 60’ for 90 days in a composting facility that has previously agreed to accept them.

10. The definition of a bio-plastic is one made plants or one that biodegrades e.g. a compostable plastic. However this also means that oxo-degradable plastics, which are made from oil are classified as bio-plastics. This is because they break down when exposed to oxygen and sunlight, although they actually end up as micro-plastics. Thankfully they are being banned by the EU in 2020.

And now for something positive (wooo hoo)……

11. The Ellen MacCarthur Foundation has 350+ packaged goods companies, raw material producers and governments  wouldwide sign up to the New Plastics Economy thus far. They have all committed to: E

​12. The UK Plastics PACT, a voluntary scheme of manufacturers, supermarkets, producers and NGO’s  have pledged to ban the sale of 8 problematic plastics before the ban for the same items come into effect in the EU:

Want all the insights into Waste and recycling, watch the Waste 101 recording

Join the newsletter for exclusive discounts, tips and inspirational news!

Thank you for joining the Sustainable Sidekicks Newsletter!

10% of all online courses go to grassroots charities.

20% of all consultancy and bespoke workshops go for rewilding.

50 free places are awarded to campaigners from underrepresented communities each year.