From animal activists to buff bodybuilders: what the vegan movement can tell us about mainstreaming environmental products and behaviours

Here are four behavioural science reasons that veganism has moved from the peripherals of society to the past-time of gym enthusiasts which can provide insights for others targeting mainstream audiences with environmental messages and products.  ​

As a vegetarian since birth, sometime vegan, and now a flexigan (flexible vegan), for the environment; I’ve been fascinated to see the mainstream crossover of the plant-based diet. Looking at it through a behaviour change lens, there’s much to learn for other pro-environmental behaviour campaigns, that want to reach and engage more mainstream audiences.

1. Match messages to your audiences’ values 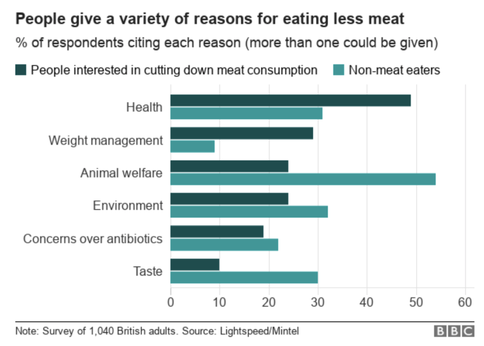 People go vegan for many reasons, historically it was for the animals and more recently there are people like me going vegan for the environment. But there is also a huge movement of people going vegan or cutting down meat for health.

Health is a big driver for Millennials (born 1980-2000) and, more recently, Gen Z (dubbed Generation sensible). According to numerous studies they are exercising more, eating smarter and smoking less than previous generations.

Going vegan for animal welfare, the environment or health are all value-driven choices and values can influence behaviour. This highlights that pro-environmental behaviours can be adopted and achieved by those who hold other values as long as the messaging about the behaviours resonates with those values.

Takeaway: If the audience being targeted is concerned about health, communications can be broadened out to focus on the health benefits of pro-environmental behaviours such as active travel or reducing food waste.

Similarly, if an audience is known to hold more hedonistic values, describing the joy and pleasure associated with behaviours like slow travel, gardening or upcycling might be more effective. This is also a more positive framing that focuses on the benefits to human and planetary health rather than the feelings of guilt, shame and cognitive dissonance that can arise when discussing negative impacts.

It’s also important to consider who is delivering environmental messaging. This is because we are social creatures and model our behaviour on people we identify with and want to fit in with (our social identity).

Historically, vegans have  been perceived as fringe or extreme and stereotyped as being pale and unhealthy. Not any more, as vegan role models include buff bodybuilders, Hollywood stars and F1 drivers who talk about how they feel it has improved their performance and how good it makes them feel.
​
Takeaway: How does your audience perceive people who take part in the activity you are promoting (e.g. zero-waste shopping or going to protests)? Are they relatable to people outside of the green echo-chamber? If not how can this perception be broken down? Who else can be the messenger? Fascinatingly, messengers can be people or organisations perceived to hold authority, such as supermarkets and brands.

​For example, when supermarkets ran a trial on shopping bag taxes, people felt more comfortable taking their reusable shopping bags because the supermarket had authorised it! ( Study)

We humans are programmed to avoid pain and seek out pleasure, and food is one of those pleasures.  ​

As our brains are wired for shortcuts, making decisions can be painful to our brains (it also uses energy which it is always trying to conserve). Behavioural psychologist Dan Ariely suggests we must assume that people:

In other words we have to remove the friction from a behaviour and design “a path of least resistance”.
(Dan Ariely on Changing Customer Behavior)

​Historically, eating out as a vegan and vegetarian involved none of the pleasure (boring food) and all of the pain (hard to find, overpriced) – trust me, I did it for 30 + years before things changed for the better.  The wider availability of a tempting variety of interesting, tasty meat-free meals and substitutes that directly replace meat remove the friction and the pain of changing diets for many people.

Takeaway: What are the frictions and pain points with other environmental behaviours or product switches?
​How can these frictions be removed?  How can pleasure be brought into the scenario?

4. Focus on the benefits and not the loss

Behavioural psychologists suggest that we experience loss of giving something up twice as painfully then we would feel pleasure about the equivalent gain – Yes FOMO is real.

In terms of changing diets or habits (be it giving up chocolate, junk food, flights or dairy) we immediately think about all the things we will miss out on.

For example, when I was working at Shambala festival in 2016, it announced it was going ‘meat and fish free’. Social media was afire with complaints, with some people even claiming it was a violation of their human rights.

However, the festival booked the most delicious, interesting and satisfying food traders. As a consequence, 77 % of the audience voted for Shambala to remain meat and fish free, and 52%said they had changed their diets since the event. In hindsight, I wonder if announcing the festival was going ‘plant-based’ would have had a more positive response, as it focuses on the positive and not the ‘loss’ of meat and fish.

Takeaway: Where possible, frame environmental choices in terms of the positive benefits rather than loss or sacrifice. For example, instead of talking about how I have given up flying,  I  always talk to people about the benefits of slow-travel and the amazing experiences I have on trains.

I hope you’ve found some useful insights here for your environmental campaign or ethical business.
For a more in depth exploration of these topics, take a look at our workshop replays and for regular tips and resources join the email newsletter. 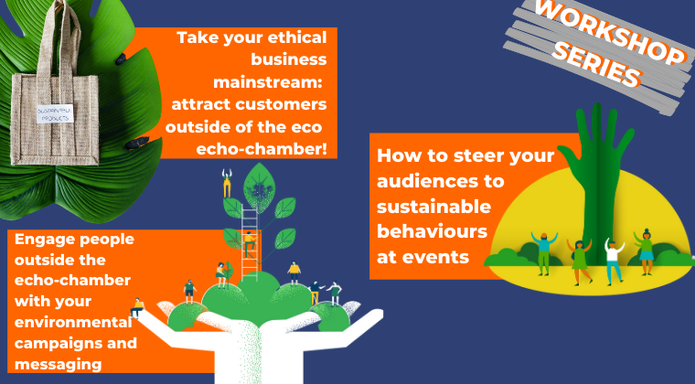 Get access to the replays from £19, a series focused on different sectors so we can delve into the most relevant principles so you can achieve greater reach and engagement in your work or business.

Thank you for joining the Sustainable Sidekicks Behaviour Change Newsletter!

10% of all online courses go to grassroots charities.

20% of all consultancy and bespoke workshops go for rewilding.

50 free places are awarded to campaigners from underrepresented communities each year.